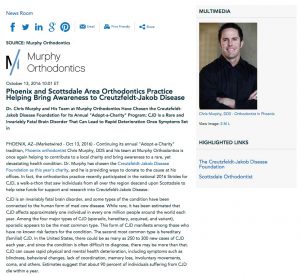 Dr. Chris Murphy and his team at Murphy Orthodontics have chosen the Creutzfeldt-Jakob Disease Foundation for its annual “Adopt-a-Charity” program. CJD is a rare and invariably fatal brain disorder that can lead to rapid deterioration once symptoms set in.

Phoenix, AZ – Continuing its annual “Adopt-a-Charity” tradition, Phoenix orthodontist Chris Murphy, DDS and his team at Murphy Orthodontics is once again helping to contribute to a local charity and bring awareness to a rare, yet devastating health condition. Dr. Murphy has chosen the Creutzfeldt-Jakob Disease Foundation as this year’s charity, and he is providing ways to donate to the cause at his offices. In fact, the orthodontics practice recently participated in the national 2016 Strides for CJD, a walk-a-thon that saw individuals from all over the region descend upon Scottsdale to help raise funds for support and research into Creutzfeldt-Jakob Disease.

CJD is an invariably fatal brain disorder, and some types of the condition have been connected to the human form of mad cow disease. While rare, it has been estimated that CJD affects approximately one individual in every one million people around the world each year. Among the four major types of CJD (sporadic, hereditary, acquired, and variant), sporadic appears to be the most common type. This form of CJD manifests among those who have no known risk factors for the condition. The second most common type is hereditary (familial) CJD. In the United States, there could be as many as 250 to 300 new cases of CJD each year, and since the condition is often difficult to diagnose, there may be more than that. CJD can cause rapid physical and mental health deterioration, including symptoms such as blindness, behavioral changes, lack of coordination, memory loss, involuntary movements, coma, and others. Estimates suggest that about 90 percent of individuals suffering from CJD die within a year.

Dr. Murphy says that one of his patients at Murphy Orthodontics has been directly impacted by CJD, with her father and other members of her family having been afflicted with the condition. He notes that, like the Epilepsy Foundation of Arizona last year, the practice typically has a personal connection to the conditions represented by charities it selects, with patients, staff members, or their loved ones affected in some way. In addition to its participation in the Strides for CJD walk-a-thon, Murphy Orthodontics is supplying information about the condition at its offices and encouraging patients to donate when possible. The practice is also accepting donations in the form of “Murphy Money,” gold and silver tokens awarded to children and adolescents for taking good care of their braces, arriving at appointments on time, and other achievements. Dr. Murphy will be making a monetary donation to the CJD Foundation for each “Murphy Money” allotment that is collected. The practice also holds contests from time to time, and will be making a donation for each patient entry.

By choosing the CJD Foundation as the practice’s “Adopt-a-Charity” for this year, Dr. Murphy says that he and his team are able to shine a light on this terrible disease and help the foundation in its efforts.

About Chris Murphy, DDS
The head of Murphy Orthodontics in the Phoenix, Scottsdale, and Goodyear area, Dr. Chris Murphy is a Diplomate of the American Board of Orthodontics and a member of the American Association of Orthodontists. He also holds membership in the American Dental Association, the Pacific Coast Society of Orthodontists, and the Arizona Orthodontic Study Group. Dr. Murphy is a Recognized Specialist at the Kois Center and has been recognized as a Top Orthodontist in Phoenix Magazine. Murphy Orthodontics offers a full array of treatments for both adults and children, including a wide range of braces options as well as Invisalign®, the HARMONY System lingual braces, and many other advanced techniques designed to correct mild to severe orthodontic concerns. Dr. Murphy is available for interview upon request.

For more information about Dr. Murphy and his practice, please visit murphyorthodontics.com and facebook.com/MurphyOrthodontics.